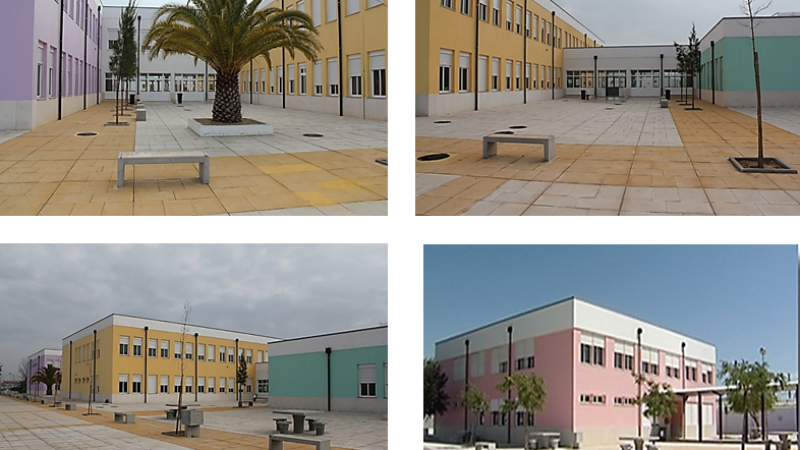 Located in Alverca and part of the municipality of Vila Franca de Xira, the school has around 1000 students aged between 10 and 15 years. Although this county is known for its natural and gastronomic heritage, where urbanism and rurality combine, students know less and less about the origin of what they eat, particularly about vegetables.

This living-lab involved 37 students, ages between 12 and 15 years-old and 6 teachers. The project began with the calculation of the students’ ecological footprint, who recognized that the high values obtained were partially due to the way they dealt with the consumed food. From there, curiosity led them to try to find out about the environmental impact of the meals served in the school canteen. Students monitored the service and identified problems related to both food waste management and food education. Then, they propose an action plan to solve these problems.

The solutions, to be developed together with the societal actors, include workshops on nutrition, organic waste management and composting, the dynamisation of a school garden, and the creation of sustainable and healthy food recipes.

The school leaders also gave their impressions. President of the General Council of Pedro Jacques de Magalhães School Group said that “the main virtue of a project of this nature is the involvement of students in all issues related to their life at school. Often, we speak exclusively of academic aspects related to formal learning outside the classroom. However, reflecting on what we eat at school, food waste and ways to reduce it, help to make future students more informed, responsible and committed citizens”.

Deputy Director of Pedro Jacques de Magalhães School Group: “In the defense of environmental resources, this project allows our students to have an active intervention, with their families, in the fight against food waste and in the effective separation of waste. The study carried out in our cafeteria indicates worrying situations in the diet of our families, as it does not reveal that most of them encourage healthy habits. Likewise, waste separation was a topic addressed at the “World Café” and the conclusions reveal that the students involved in the SALL project have already developed, in their conscience, mechanisms for approaching colleagues and families in the sense of constituting themselves as great defenders of the environment and of this planet that is so ours… the Earth”.

Director of Pedro Jacques de Magalhães School Group: “At a time when environmental resources are starting to be scarce, it is necessary to raise the awareness of our students to defend them and educate families in the context of containing food waste and separating waste. This project allows the Educational Community to reflect on the eating habits of our students who reveal themselves as unhealthy due to the low consumption of soup, vegetables and salads. Through the “World Café” activity, strategies were defined to combat food waste and to educate our families in the effective separation of waste. We will continue with actions to raise awareness of families that are part of our Educational Community, in order to increase the fight against food waste, promote healthy eating and encourage the separation of waste”.

Students were happy to give feedbacks too. In their opinion, the project greatly helped the school to waste less fruit. Activities, such as the vegan/vegetarian testing were well organised and monitored by teachers, and it showed students that vegan food tastes good.

“It is a project that is necessary, it has been very well implemented, it has made a difference and I think it has really changed mentalities. At least it changed mine”.

You can find out more about which cookies we are using or switch them off in settings.

This website uses cookies so that we can provide you with the best user experience possible. Cookie information is stored in your browser and performs functions such as recognising you when you return to our website and helping our team to understand which sections of the website you find most interesting and useful.

Strictly Necessary Cookie should be enabled at all times so that we can save your preferences for cookie settings.

If you disable this cookie, we will not be able to save your preferences. This means that every time you visit this website you will need to enable or disable cookies again.

This website uses Google Analytics to collect anonymous information such as the number of visitors to the site, and the most popular pages.

Please enable Strictly Necessary Cookies first so that we can save your preferences!